In a combustion engine with an injection system, the amount of fuel injected should depend exclusively on the opening time of the injectors. Thus, in an indirect injection engine, the difference between the fuel pressure in the rail and the air pressure in the intake manifold must remain constant at all times regardless of the engine operating regime.

In engines with a multi-point injection system, the pressure regulator is usually mounted at the end of the fuel rail and in single-point injection engines in the body of the central injector.

Depending on the number and positioning of the fuel and air connections, there are several types of pressure regulators. Also, these can be with fuel return in the tank or without return, the most commonly used ones being with a return.

The regulator is actually a pneumatically regulated pressure control valve (see figure below).

It contains an elastic diaphragm (membrane) (4) that divides the body of the regulator into two chambers: fuel and air. Inside the regulator, there is a valve (5) and a helical spring (2). The valve is held in place due to the spring being pressed. When the force due to the rail pressure becomes greater than the spring force, the valve (5) opens (rises) and the fuel is fed back to the tank via the return channel (7).

The force to push the spring so by default the maximum pressure in the rail is regulated by the depression in the air chamber. The greater the air depression, the lower the spring force because it creates a suction force that tends to open the valve.

The regulator air chamber is connected by the air connection (1) to the intake manifold after the shutter flap. In this mode, the fuel rail pressure is adjusted according to the engine load.

The maximum injection pressure in indirect injection engines is around 3-4 bar. This pressure is obtained at the maximum engine load when the pressure in the intake manifold is approximately equal to the atmospheric pressure (1 bar). 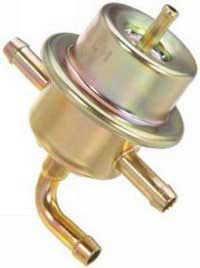 In case the pressure regulator fails to compensate for the injection pressure, depending on the air pressure in the intake manifold, it will not be done again. For this reason, the quantity of fuel injected into the cylinders will no longer be controlled resulting in abnormal engine operation.

The pressure regulator controls the fuel pressure on the rail. Any faults thereof affect the amount of fuel injected.

An engine with a bad fuel pressure regulator has the following symptoms and problems:

Difficult engine start, unstable idle RPM, and engine stalling are due to insufficient fuel pressure on the rail. In contrast, if the engine is under load (eg acceleration pedal is pressed 50%) fuel consumption is much higher because the rail pressure is much higher.

All symptoms can be based on a bad fuel pressure regulator. The most common symptom is cracking or even breaking the flexible membrane. This fault can be detected quite easily:

How to check a fuel pressure sensor

For a more detailed check of the fuel pressure in the supply circuit, a manometer can also be used. It is connected to a valve specially provided for this purpose, located on the motor supply circuit.

With the engine off, remove the valve cover and connect the pressure gauge. Start the engine and read the fuel pressure both at idle speed and at an intermediate position of the gas pedal. If the pressure is above the values indicated by the manufacturer or if it does not vary with the accelerator pedal position then the pressure regulator may be bad.

The positioning of the pressure check valve in the fuel supply circuit
source: gmforum.com

Video Of The Week