Tire air pressure is of particular importance for the active safety of the car as well as fuel consumption. If the pressure in the tires is below the limit specified by the manufacturer, during the movement of the car, the tires will deform excessively.

This deflection leads to an increase in tire temperature as well as a reduction in cross-sectional adhesion. In extreme cases, especially if the tire is at the end of its life, it can disintegrate.

Tires with low air pressure cause car instability in corners due to loss of grip. In addition, on wet surfaces the braking distance to stop increases considerably.

Also, excessive tire deformation results in increased rolling resistance. For this reason, fuel consumption will increase significantly if it is run with tires with air pressure below the limit specified by the manufacturer.

History of the pressure sensor in wheels

In the 1990s, a series of incidents resulted in 250 deaths and over 3000 injuries due to problems related to a certain type of tire. The companies involved in this incident are Ford and Firestone. Ford Explorer cars equipped with Firestone tires have been involved in several incidents due to tire disintegration during rolling. Tire disintegration was due to insufficient air pressure combined with running at high speeds and high outdoor temperatures.

Following these events, the National Highway Traffic Safety Administration (NHSTA) has imposed a series of regulations to prevent car accidents due to improper tire pressure.

The regulations were included in a document called TREAD (Transportation Recall Enhancement, Accountability and Documentation). The document, adopted by the US Congress in 2000, among others, requires car manufacturers to use systems to monitor the air pressure in the tires. These systems are called TPMS (Tire Pressure Monitoring System), and the regulations apply to cars as well as passenger vehicles.

Calendar of TPMS regulation in the US and EU

Car manufacturers are required to equip cars with TPMS systems as follows:

In addition to the US and the EU, South Korea, Russia, Indonesia, the Philippines, Israel, Malaysia, and Turkey will adopt regulations requiring the equipping of cars marketed with TPMS.

The TREAD act contains a series of regulations that are required for tire pressure monitoring systems (TPMS):

The first tire pressure monitoring systems have been used in Europe as optional systems for luxury cars since the 1980s. The first TPMS-equipped car was the Porsche 959 in 1986. In the mid-1990s, in the US, Chevrolet Corvette was marketed with TPMS.

There are two types of tire air pressure monitoring systems:

ITPMS systems use the wheel speed signals provided by the ABS. The control algorithm compares these signals and detects which of the four wheels has air pressure below the limit imposed by the manufacturer.

The operating principle of this system is based on the wheel’s radius. At the nominal pressure, the tire has a certain rolling radius. The tangential speed of the wheel is given by the product between the wheel speed and the running radius.

If the tire pressure drops, then the tread radius decreases. At the same time, for the wheel to have the same tangential speed, its speed will be higher. Thus, comparing the speeds of the four wheels can be decided which has a lower rolling radius, so low air pressure.

ITPMS systems have the advantage of using existing equipment on cars (ABS). The changes are software only (eg in the ABS computer) and do not require additional equipment. On the other hand, at iTPMS, the tire air pressure is approximate, it is not directly measured.

For this reason, there are several disadvantages to iTPMS:

In the US, iTPMS systems do not comply with the regulations required by the TREAD act.

Dunlop in collaboration with Bosch created the Warnair system. This is a system that indirectly monitors the tire air pressure using the information from the ABS speed wheel sensors.

The Warnair system is an integral part of Bosch’s ABS / ESP systems. This system was first launched on the European car market and equipped the BMW 5 series (E30), which is a component of the DSC (Dynamic Stability Control) system.

The second generation of the Warnair system, called DDWS (Dunlop Deflation Warning System), contains more advanced computing algorithms that, in addition to analyzing the speed of the wheel, also performs a frequency analysis to detect which tire has pressure outside the manufacturer’s specified limits.

The DDWS system is operational from speeds greater than 15 km / h to the maximum speed of the car. It must be recalibrated each time a tire is changed or replaced.

The Deflation Detection System (DDS) indirectly determines the tire air pressure using the wheel speed information of the ABS. This system is 100% software and uses the existing equipment on the car (ABS sensors) to alert the driver in case of insufficient tire pressure.

Usually, cars that are equipped with tires that allow rolling and in case of loss of pressure (en: run-flat tires) have iTPMS systems to alert the driver of a tire defect. without warning the driver does not notice the defect and can run with an insufficiently pressurized tire with a negative effect on the active safety and fuel consumption.

DTPMS systems use sensors in each tire that transmit real-time information on tire pressure and air temperature. They transmit wireless information at frequencies of 315 MHz or 434 MHz to the car’s computers.

Example of pressure information for each car tire 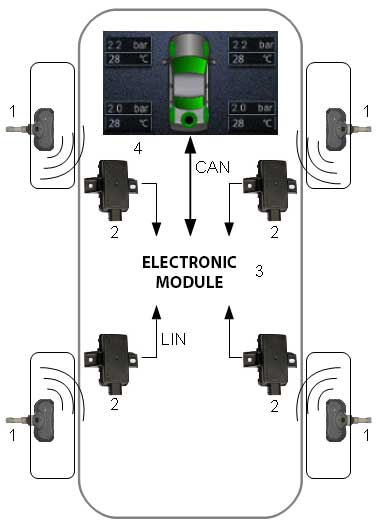 Sensors (1), powered by internal batteries, measure and send real-time pressure and temperature information. In addition to this information, the sensors also send a unique identifier for each wheel as well as the charge status of the battery.

A receiver/antenna (2) is mounted near each wheel, which receives information from the sensors. Further, the information is transmitted, via a direct electrical connection, to an electronic TPMS control module (3).

More advanced systems use the LIN protocol for communication between the receiver and the control module. Using the CAN bus, the TPMS electronic control module communicates and transmits the dashboard information (4) that displays, for each wheel, the pressure and temperature information.

Example of pressure and temperature information for each car tire 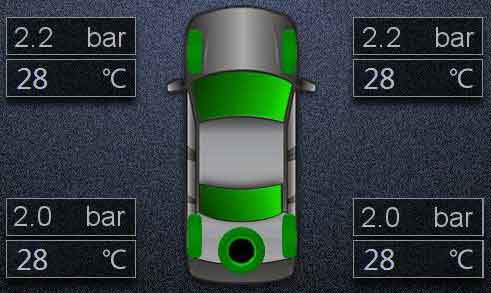 Optionally, dTPMS systems can also monitor the air pressure in the spare tire. 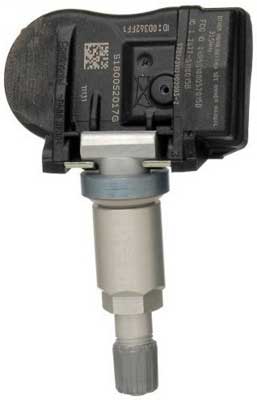 The tape sensors are specific to Ford and Mazda cars, the rest of the manufacturers using sensors integrated into the tire valve.

The most commonly used sensors are those integrated into the tire air valve. Regardless of the type of manufacturer, the basic components of this sensor are approximately the same. A complete TPMS sensor kit contains the following elements:

Components of a TPMS sensor integrated into the tire valve 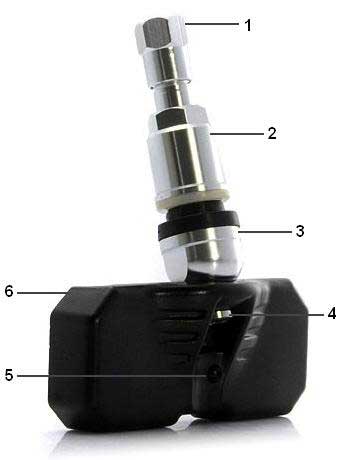 The sensor’s electricity consumption must be very small so that the battery life is relatively long (around 5-7 years). Also, the total mass of the sensor must be small so as not to cause wheel imbalances, which can be felt at high speeds.

Block diagram of the electronic system of the TPMS sensor

In addition to the pressure information, the sensor also measures the air temperature of the tire. To transmit this information the sensor is powered by a long-life lithium-ion battery. The battery cannot be replaced, if the battery is low, it must be replaced with a new sensor.

The TPMS sensor must operate nominally under particularly severe conditions. Extreme operating temperatures are -40 C and +150 ° C (-40 F and 302 F). The shocks it can withstand can reach 2000 g. It also has to withstand moisture, condensation, and dust.

The hybrid dTPMS system from TRW

This system developed by TRW is a hybrid simplified dTPMS system. In addition to the pressure and temperature information received from the wheel sensors, it also uses the ABS speed signals to determine the position of the low-pressure wheel.

With this combination of a dTPMS system and an iTPMS system, only one wireless receiver can be used for all four pressure and temperature sensors. This reduces the total cost of the system while maintaining the operating mode.

Components of the TPMS system for racing cars

The system consists of one sensor and one receiving antenna for each wheel. The antennas are connected to an electronic control module that transmits the pressure and temperature information from tires to both the pilot and the technical team from the stands.

Where is the tire pressure sensor located?

In most cases, when discussing these sensors, it should be noted that their place is inside the car tire. These can usually be seen when you see the wheel air valve.

To know whether or not the car has such a sensor, it is necessary to see if there is an installed nut around the valve. There are small exceptions where the cars have these sensors, but the nuts are missing.

The easiest solution, however, to find out whether or not the car has air pressure sensors on the tires, is to remove the tires from the rim.

Yes, you can find universal tire pressure sensors in auto shops and install them on your tires.

Can tire pressure sensors be wrong?

If you see the tire pressure icon it can mean that your tires have low o high pressure, but it can also mean that the tire can be faulty.

There is also the possibility that this message may appear in the instrument panel because there is a faulty TPMS control unit or a TPMS that needs resetting. There may even be defective cables that lead to the appearance of the message.

However, to detect all these problems, it is necessary to use an OBD2 scanner, and thus all the problem codes existing in the machine control unit will be readable.

Lion Family of Four Decal, H 3 by L 9 Inches, Go to Your Orders, Find Your Order in The List, and Click Contact Seller
$4.99
Buy on Amazon