All modern diesel cars are equipped with a particulate filter. If you have heard that diesel cars eliminate other harmful pollutants besides NOx, you heard right. These are carcinogenic particles that you can even see when a diesel car accelerates and releases black smoke from the exhaust. However, these are stopped by the diesel particulate filter (DPF) filter.

Deleting a DPF means removing the diesel particulate filter from the exhaust circuit and replacing it, in most cases, with a piece of pipe. This is done through two types of cancellations: physical removal and software cancelation. This process is also known as DPF OFF

Many diesel cars on the road are equipped with a DPF or FAP particulate filter. The name means Diesel Particulate Filter and refers to an exhaust gas filtration system of a diesel engine. It works as a catalytic converter, as petrol cars have that filter out CO2 emissions, but in the case of diesel cars, things are more complicated.
For the simple reason that we are talking about larger, solid particles, not of gases passing through the catalyst. Hence the major problems of cars with DPF.

How does a DPF filter work?

A normally functioning DPF diesel car will not release black smoke, ie smoke made from the particles it wants to stop. But it stores them in the filter, just as an oil filter keeps the deposits and lets only the liquid pass. But, from time to time, the DPF particulate filter fills up. 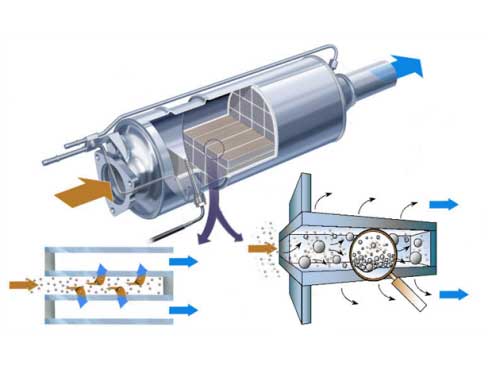 There are two situations:  some cars equipped with larger but disposable filters, which will keep you around 150,000 kilometers (94.000 miles), after which, when the dpf error icon lights up, it means that it is clogged, so it must be replaced with a new one. But it is also the option of a particulate filter with automatic regeneration. Thus, a longer-lasting filter that cleans itself.

What does DPF filter regeneration mean?

When the car ECU receives a signal from a pressure sensor that the DPF filter is full, a light appears on the board (see photo). This means that either the filter must be changed or the car must enter in “regeneration mode”. If the car has a DPF filter with regeneration, it means that the driver must drive on an extended road and keep the car at a speed of over 65 km / h (40 miles/h) until the error code disappears.

During this time, at high speed, the ECU makes more fuel pass through the engine, so that the temperature in the DPF filter will increase extremely. Cleaning is a thermal one and burns the deposits inside.

There are cars equipped with an additional injector directly into the DPF filter. When the car enters regeneration mode, the computer directly injects more diesel fuel and thus increases the temperature, until the deposits dissolve thermally and are removed on the exhaust.

The regeneration in some modern cars is done when the car is in place in a parking lot and the engine automatically turns at 1400-1600 rpm for several minutes, until the dpf icon disappears.

How can a diesel particulate filter get clogged?

Usually, DPF filters get clogged when a diesel car runs exclusively in crowded areas, at low speeds. When a driver only accelerates to 1500-2000 rpm, in short turns, the filter does not have time to clean.

If, however, at least once a month, that car would go out on a long journey, and the engine will be kept over 3000 rpm for a longer period of time, the filter would warm up enough and clean itself more easily.

What happens when we drive with a clogged DPF?

A car that runs with a clogged DPF will certainly have problems. Because the exhaust gases have nowhere to go in the exhaust circuit, being blocked by the clogged holes of the DPF, the ECU realizes this and puts the car in “safe mode” or “limp mode”, in a way that it loses power.

Obviously, here we are talking about the situation in which the dpf icon lights up on the board and you do not take measures, and do not regenerate the filter as described above.

The idea is that if your “clogged DPF” error lights up, you must promptly proceed to its regeneration or replacement. If not, the car will enter safe mode and will consume a lot of fuel.

What does DPF cancellation or deletion mean?

In some cases, even the automatic regeneration made by the car no longer works and the filter needs to be changed. We are not talking about a cheap piece, but a new piece that costs around $ 1000-1300, depending on the car. While most drivers do not compromise and replace particulate filters without thinking. Elsewhere, a real business was born from “cheating” the car and removing the filters.

Instead of changing it with a new, expensive particulate filter, you also have the “bad” option to go to a service that can cancel the DPF. What does it mean? It means that those guys will completely remove the particulate filter and they will let your car throw into the atmosphere pollutants and carcinogens.

The price of such an intervention is about 350-500 $ and lasts several hours.

What are the risks of deleting DPF?

It should be known that in some countries it is illegal to cancel and remove the diesel particulate filter. Which is normal, because dangerous substances to health are emitted into the atmosphere.

The same is true with diesel engines that no longer have a particulate filter. You recognize them immediately, as they release black smoke when they accelerate. Well, all those little black particles are carcinogenic. If we remove the particulate filter from diesel cars, we only condemn our health, especially the health of traffic participants who are around such a diesel car.

Another problem with the DPF removal is that in the same housing with the particulate filter is also found the CO2 catalyst. There are many who take out your entire casing and replace it with a pipe.

Others remove your particulate filter from the housing and put your metal housing back, leaving the catalyst in it. But most of the time the catalyst is bonded to the DPF and it is removed by bursting (being of a ceramic material).

And that is why you wake up with noises in the exhaust without knowing. In both cases, the effects are not good. Another disadvantage of removing the DPF filter is that everything that comes out of the exhaust will smell extremely ugly, like the black smoke from an old tractor.

The particle filter also has a smell filtering function, along with the soot particles, so if we remove it, in addition to inhaling carcinogenic particles, we will also fill the atmosphere with bad odors.
When we feel the heavy smell of diesel, it is clear that we woke up with some particles in our lungs …

How to better manage a diesel car with DPF?

If we have a diesel car with DPF, we have to drive it keeping the engine at higher RPM, and,  from time to time, to have longer drives for the DPF to clean itself. We must also regenerate it immediately as the light appears on the board and we must replace it with a new one if the regular regeneration methods are not working anymore.

However, complete removal or cancellation of the filter is not a solution, and it is illegal too. There are some services that can clean the DPF with chemical solutions, but this involves cutting the metal housing, removing the filter, and reinstalling it. Which will undoubtedly lead to premature rusting and drilling of the housing.

Amazon eGift Card - Amazon For All Occasions
Buy on Amazon
SaleBestseller No. 2